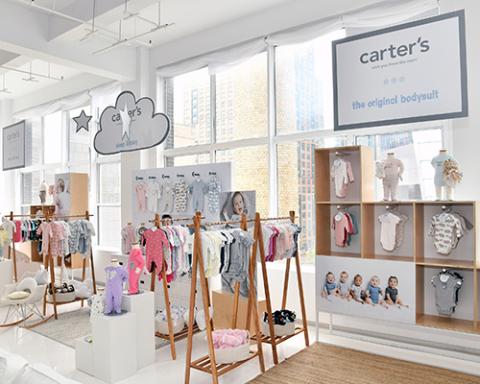 When Santa’s sleigh neared danger of delay this past holiday season, more Carter’s customers turned to BOPIS to ensure the right presents would be under the tree.

In reporting its fourth-quarter financial results, the children’s wear retailer and manufacturer revealed details on the progress of its omnichannel tech investments, which included greater consumer adoption of both buy-online-pickup-in-store (BOPIS) and ship-to-store.

The company, which also includes the OshKosh B’gosh brand, said BOPIS proved to be a hit as Christmas approached and consumers didn’t want to wait for home delivery. The number of shoppers who chose to have their online orders shipped to their local store also significantly increased, said Richard Westenberger, executive vice president and CFO, “which is obviously encouraging as it drives additional traffic to our retail stores.”

Carter’s has invested in technology in recent years to offer same-day pickup of e-commerce orders and has been testing fulfilling these orders from its stores.

“We believe this initiative will improve the productivity of our inventory, increase the speed of related deliveries to three days or less and reduce the cost of those deliveries,” said Michael Casey, chairman and CEO.

Results of its Q4 test of in-store fulfillment were promising enough that the company plans to expand the use of stores for online fulfillment later this year, said Westenberger.

The Carter’s credit card, launched mid-year 2019, helped drive this engagement thanks to the free shipping benefit it provides members. Nearly 400,000 customers have enrolled in the credit card program, with 20% of them new additions to the company’s database. Michael Casey, chairman and CEO, said he expects it to contribute $20 million or more to Carter’s annual earnings by 2024.

Although Casey called retail stores an important part of the Carter’s and OshKosh consumer experience, he said they will close more stores than they open over the next five years. The new stores that do open will be Carter’s/OshKosh co-branded stores, as those have shown to be the best performing. Given this, all stand-alone stores will now also carry select SKUs of the complementary brand.

Carter’s opened 43 stores in 2019 and closed 25, the majority of which were older, underperforming locations.

Carter’s expects some disruption to its supply chain stemming from coronavirus (COVID-19), especially as it relates to potential delays in Q2 delivery of fall products.

“This is a very fluid situation and we’re still receiving information from our supply chain teams in Asia and from our vendors,” said Westenberger in an earnings call last week. “Hopefully, we’ll have additional information to share with you on our first quarter update in late April.”

Carter’s views e-commerce as a significant source of growth and has been investing in its fulfillment strategy to meet demand. As part of this, the company’s Atlanta fulfillment center is currently utilizing eight of the Kindred piece-picking SORT robots, which leverage computer vision and artificial intelligence to ID and select items in real time.

Kindred’s AutoGrasp robotics intelligence platform uses vision, grasping and manipulation algorithms to pick and place clothing, poly bags and other small items, and the picking is said to become more efficient and more accurate over time.