In what was a self-described snarky retelling of her data science journey, Maria Macuare, VP IBS global data and analytics at Mondelez International, challenged the audience of Analytics Unite last week to examine the role that the ego plays in leadership — in order to unify the role of analytics teams to drive greater value for the industry.

Macuare described her personal journey as she leveled up during her time at Procter & Gamble, the skill sets she acquired, the connections she formed with her peers, and the access to management she began gaining — as well as the sometimes-confusing nature of such access.

“I was being managed, but mismanaged,” she said. “The analytics profession at that point back in time was managed by competent people, but they weren't necessarily analytics people. So I felt misunderstood. I felt that I couldn't really communicate with this manager. I was a magician in my craft, I could do amazing things, but my manager didn't quite get it.”

As her work evolved and the conversation shifted to having the “DNA” for data science — that is, either being born with the necessary capabilities or not — “I was convinced that I was born with it.”

It was a controversial topic, she conceded, but having this “DNA” translated to receiving training that was only available to her and her fellow analytics colleagues — a somewhat puzzling process that brought about a bit “of an identify crisis.” 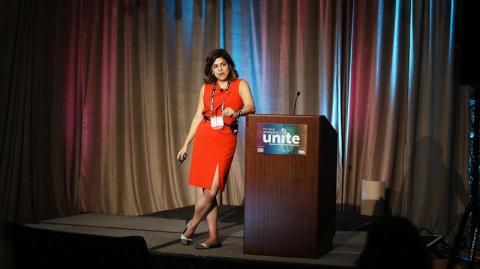 But as the race to create citizen developers and data sciences takes place, the role of people like Macuare in the industry has required an evolution. Whereas her spotlight was once best used to shine a light on her department, it’s now about delivering for all employees of the company at large.

And whereas she once received a great deal of training “that only I can understand” because of the so-called DNA and an ability to explain complex topics to executives — something she once viewed as an entitlement rather than privilege — this is no longer the path of the future.

“This is an industry that has been slowly and slowly building our ego, and making us believe that we can do — this is about me, that this is about my skillset. This is about me independently driving success for a company because I’m the gifted one.”

Today’s leaders must instead shift this mindset to bring their organizations and the industry along through their transformation, ensuring they’re advancing data literacy for many and not just a privilege for a few.

Similarly, vendor partnerships today are critical for success. “We need to make sure that we're bringing the outside in. And in this context, I think our vendor partners are crucial. I don't think there's a way that I can deliver the promise of advancing data analytics for a company without their part [and] collaboration. … But you guys sometimes make it really, really hard,” she said pointedly, citing such hurdles as exclusivity contracts for data sets and/or fragmented and overwhelming cold calls.

In offering advice, she noted, “The one currency that we have going for us is trust. … And a way to drive trust is to be brutally honest. So don’t oversell. … Don’t plaster my logo in your presentation because you talked to me on the phone once.”  Instead, demonstrate more business outcomes and send samples of your work.

Her final call to action: “Stop taking yourself so seriously. Laugh a little. Don't let ego be your driver. And if you don't believe me, you can look at the people who make an impact in the world. There's so many stories about them being self-deprecating, not taking themselves so seriously, and disarming their opponents just by using sheer sense of humor.”

This article first appeared on the site of sister publication CGT.

“When AI is truly bringing disruption to a company and really transforming the company, it is not as flashy as these fields,” she said — albeit acknowledging her cynicism and noting that much of the hype stems from CEO FOMO.

Research Shows Consumers Believe Metaverse Will Be Mainstream in 5 Years

Retailers and brands understand the need for a seamless consumer experience, and now it's essential for the retail industry to think about the holiday season from a online-first mindset.

Retail Leader Pro talks to UpWest Chief Comfort Officer Jamie Schisler about how the purpose-driven DTC brand shifted its strategy and is growing its community through brick-and-mortar stores.