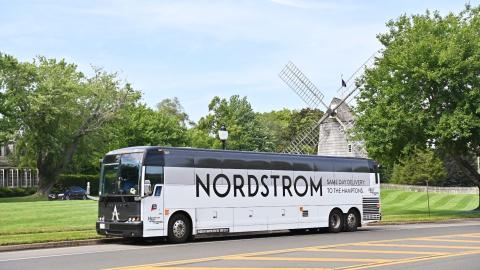 Customers can digitally shop across all Nordstrom stores in their area and pick up their purchases at the store of their choosing the next day. Credit: Nordstrom

This summer, department store Nordstrom is opening another of its neighborhood service hubs, this time in the Hamptons.

Nordstrom Local Pop-Up in Southampton, NY, will open on May 27ththrough September 7. The 850-square-foot location will offer online order pickup, alterations, returns, and more for customers who live, work and travel in the Hamptons.

The New York metro area is one of Nordstrom's largest markets with 7 full-line stores, 15 Rack stores and two Locals in addition to this pop-up. Since entering the New York market, Nordstrom has heard from many of its customers that they are spending their summers in the Hamptons.

"New Yorkers have embraced Nordstrom Locals since we opened our first two locations on the Upper East Side and West Village in 2019," said Chris Wanlass, vice president and general manager, New York City. "This summer at our Nordstrom Local pop-up in the Hamptons, we'll continue to make it easy for our customers and expand how and where we serve them."

Customers can digitally shop across all Nordstrom stores in their area and pick up their purchases at the store of their choosing the next day. This model gives customers nine times greater product selection combined with the convenience, service and speed they expect, the retailer said.

"Nordstrom Local service hubs play an important role in delivering on our Closer to You strategy and our priority to win in our most important markets because they allow us to get physically closer to our customers," said Jamie Nordstrom, chief stores office at Nordstrom, Inc. "This summer, we look forward to offering more convenience and connection to our Hampton's customers who will be able to access Nordstrom core services like next day order pick-up, returns and alterations in their summer neighborhood."