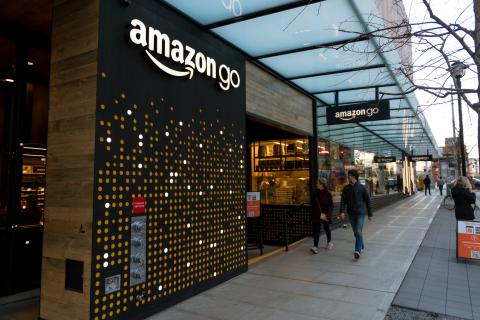 Amazon.com Inc. is creating checkout terminals that could be placed in retail stores and allow for shoppers to pay via credit card information linked to their hands, The Wall Street Journal reports.

Customers would use the terminals to link their palm print to a credit or debit card, establishing the link between their bank accounts and palm prints by inserting a card the first time they use the terminal and then scanning their hands.

Last September, the New York Post reported Amazon’s engineers were quietly testing scanners that can identify an individual human hand as a way to ring up a store purchase and that employees at Amazon’s New York offices were serving as guinea pigs for the biometric technology, using it at a handful of vending machines.

However, the NYP reported the goal was to roll them out at Amazon’s Whole Foods supermarket chain in the coming months. The WSJ reports Amazon plans to offer the terminals to outside businesses with a lot of repeat customers. The company has also reportedly begun working with Visa on testing out the terminals.

A December patent filing by Amazon Technologies Inc. describes “a non-contact biometric identification system [that] includes a hand scanner that generates images of a user's palm.”

Amazon Go already allows shoppers to check into the stores with an app and purchase items without checking out and Bloomberg reported in November that Amazon wants to expand its Go tech to future supermarkets. Whether the card-less tech is used in Amazon-owned stores or outside of the retailer, it may be a next step in the retail giant’s convenience plans.