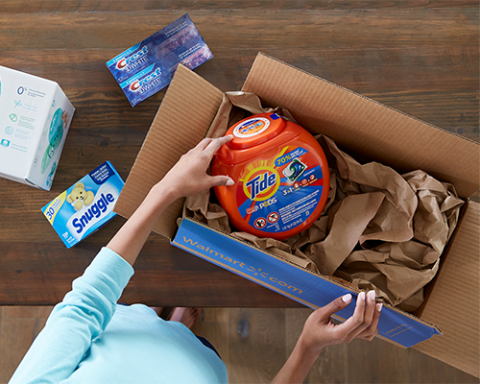 Walmart may begin testing a membership program to take on Amazon Prime as soon as this month, according to a report from Recode, begging the question of whether consumers would pay for two very similar offerings.

Walmart’s program, said to be called Walmart+, may expand (or rebrand) Walmart’s current Delivery Unlimited service that offers unlimited grocery delivery for $12.95 a month or $98 a year. It would also potentially add in such incentives as order by texting, discounts on fuel and prescription drugs, and access to cashierless checkout.

Pressure in the race to secure customer loyalty via speedy delivery is high, ratcheted up by Amazon’s shift to one-day delivery for Prime members last year. The company said in January that it has 150 million global Prime members.

Its e-commerce sales are estimated by eMarketer to reach $404 billion by the end of 2020 and $468.78 billion by 2021, up from 2018’s $292.97 billion, and this move to one-day shipping has unlocked new avenues of growth for the e-commerce giant, eMarketer senior forecasting analyst Cindy Liu said.

“It allows them to compete for purchases that shoppers need right away and would otherwise go to a store to get,” she noted. “This puts Amazon in a great position to capture share in new product categories like consumer staples.”

To be sure, Walmart will face an uphill climb in launching a Prime competitor, especially given Amazon’s ownership of Whole Foods. “Customers shop at Walmart because of its low-cost value proposition,” Bobby Greenberg, senior VP of strategic consulting at loyalty marketing company Kobie, told RIS. “The jury is out on whether or not they will pay membership fees for more convenience-oriented benefits.”

65% of consumers said that they would join another premium program even if they were enrolled in another.
Tom Caporaso , CEO, Clarus Commerce

Tom Caporaso, CEO of Clarus Commerce, which also works with retailers to develop loyalty programs, noted that 97% of Amazon Prime customers renew their memberships each year. However, despite this edge, the consumer data that Walmart stands to gain will be extremely valuable in steering Walmart’s future offerings, he said, adding that it’s not a foregone conclusion the two membership programs will devolve into an either-or choice for consumers.

“Many modern consumers are comfortable paying for multiple loyalty programs that save them money with immediate rewards, especially as they continue to provide unique experiences that make their daily lives easier,” Caporaso said to RIS. “According to our recent data study, 65% of consumers said that they would join another premium program even if they were enrolled in another, meaning that several consumers may end up using both Prime and Walmart+.”

Walmart killed off its standalone Jet Black text ordering service just a few weeks ago, saying that it plans to leverage the learnings. Its Delivery Unlimited service, which debuted last year, is currently offered through 1,600 stores.

Separately, Walmart is in talks with Verizon to bring 5G to its stores, the Wall Street Journal reported. The retailer would use the high-speed service to power its digital health services for consumers and employees, as well as amplify current store operations.

The reduced latency that 5G provides over current 4G networks would widen the type of health services Walmart can offer consumers, WSJ notes, as well as improve network security. It could also better manage inventory by upgrading security cameras’ ability to scan for out-of-stocks and alert associates about shoplifters.